“That grammar lesson was fun!” says no child ever.

Unless….it’s ok to be silly, and they are only incidentally labeling the parts of speech. Unless… they are not only using their memory skills , but also their creativity.

G is learning to parse sentences as he slowly builds his understanding of nouns and verbs, adjectives and conjunctions. Parsing sentences for us at this stage simply means we are reading sentences and labeling all the parts of speech and which words they are modifying. As a seven year old, he has a pretty decent grasp of how language functions. But then, being the talker he is, he certainly takes in enough practice!

We are using Level 2: First Language Lessons by Jessie Wise. The book contains one hundred short grammar lessons, simple writing exercises and picture studies. It is an easy way for me to get in part of his language teaching without having to do much prep work. The lessons only take about 15 minutes, yet seem to be thorough. He has never complained about them, but if truth be told, I would never expect them to be the highlight of his day.

During his toddler years, I bought these magnetic words from a long forgotten vendor. We have only used them occasionally, but yesterday I pulled them out in an inspired last minute idea after we had discussed articles (a, an, the). 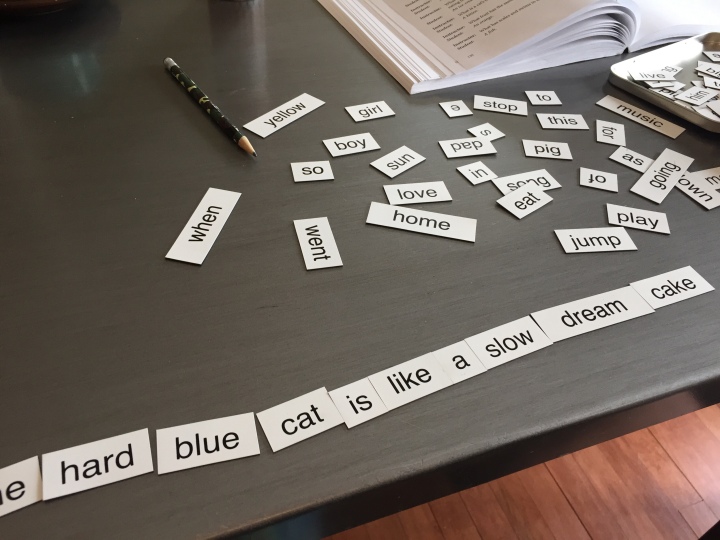 Sitting side by side, we got busy making up our own silly, lyrical sentences.

As the lesson progressed and G demanded “just one more,” the sentences just got ridiculous. However, that smarty pants labeled every single word correctly.

1. Nouns can very often moonlight as adjectives. Especially if there are several of them in a row.

2. “Like” or “as” can wear several hats. In most of our sentences, however, they were adverbs.

3. It’s a good day if you are full out laughing at a grammar lesson.